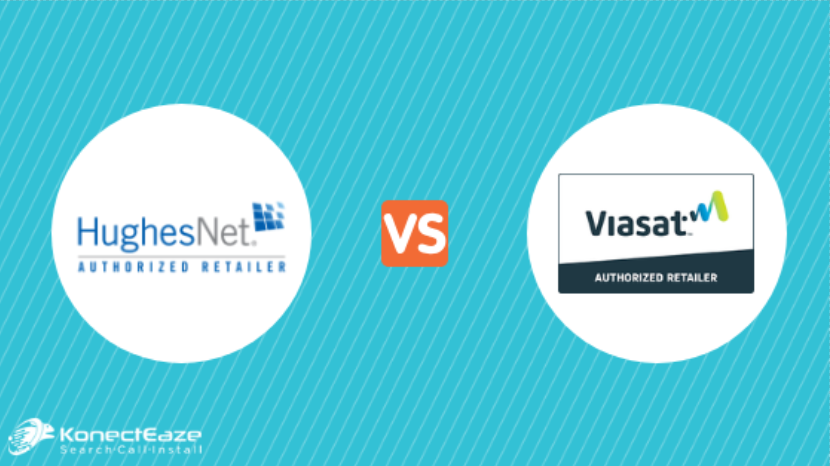 Hughesnet Reviews Vs Viasat Reviews; Who is the best Satellite Internet Provider

Satellite Internet, Is It Really Worth It?

If you've done your research on high-speed internet providers, you'll probably notice that there's not much choice for a lot of consumers. Especially if you live in a rural or country neighborhood. In some cases, there are no cable providers like Xfinity or Spectrum or DSL providers like AT&T and Centurylink in your area, and you're forced to consider getting satellite internet.

Now, I know what you're thinking, satellite internet is rife with slow speeds, latency, low data limits, etc. And, you're not wrong, however, internet providers like HughesNet & Viasat can offer faster speeds that can keep up with your streaming or gaming needs, minus some of the issues satellite internet is known for.

Viasat is one of the top satellite internet providers and typically covers customers that live in more rural areas. Their vast network allows Viasat to cover almost 99% of the entire United States. Plus, they have speeds starting at 12 Mbps and plans that go all the way up to 100 Mbps! That's more than enough to handle any gaming for streaming needs for the most hardcore gaming.

For some context, most console and PC games require minimum upload speeds of 1 Mbps, 3-6 Mbps for the download speed, and a 'ping rate' (latency) of less than 150 milliseconds. Even the most bare-bones cable internet plans start at 5 Mbps, so you'll more than likely be covered. However, your gaming experience won't be great, per se, and if you live in a rural part of town, cable internet providers won't be in your area.

Satellite internet plans from Viasat comes with a lot of benefits such as a 2-year price lock guarantee, free built-in wi-fi, free standard installation, and plans with no long-term contracts. If you're okay with having a satellite dish on your house, satellite internet can provide you with an optimal experience for most of your online needs. Just pray there isn't any heavy rain in the forecast.

For those who aren't heavy streamers of those looking for traditional TV plans, Viasat offers customers bundle packages with DirecTV. So, you won't lose out on your favorite sports teams or fan-favorite shows on the most popular networks!

HughesNet offers customers a pretty solid internet experience as well with their HughesNet Gen5 Plans. They offer customers more than enough data for them to stream videos or do some casual online gaming. As with Viasat, they offer their customers built-in wi-fi, faster speeds, and no hard data caps, which is the next best thing to unlimited data.

Even though HughesNet offers customers no hard data limits, your internet speeds will be severely slowed down if you ever go above your monthly data limit. This can be problematic for those looking to cut the cord and just have an internet only plan.

But, fear not! HughesNet offers customers a "Bonus Zone," which is essentially a period of time between 2 and 8 a.m. where their customers have access to an additional 50 GB of data added on to their data limit. So your fifth binge of Friends or Seinfeld won't be spoiled by data limits.

When or if you go over your allotted data, HughesNet will lower your internet speeds to 1-5 Mbps which is enough to stream SD-quality videos.

What Satellite Internet Means For You

For those who live in the city or in the greater metro area, you'll have access to other internet connections (such as AT&T fiber, Xfinity cable, and Centurylink DSL), so getting a satellite internet plan may not be good for you. But, for those who live further out from major cities, a satellite internet connection from HughesNet or Viasat makes perfect sense.

Satellite internet providers will also offer customers some stability as both HughesNet and Viasat offer a 2-year price lock guarantee. This is great for those who like to budget out their monthly expenses. You'll know exactly what you're going to pay every month for the promo period (which is longer than most other providers).  The 24 month agreement doesn't start when you order Viasat or Hughesnet but only after it is successfully installed in your home.

To answer our intro question, is satellite internet worth it? The answer depends on you, for the most part. If you're living in a small town that does not have access to a cable or fiber internet connection, your hand may be forced in getting HughesNet or Viasat. If you live in a city or within the metropolitan area, satellite internet makes sense on a case-by-case basis.

For example, if you live in the suburbs and you don't have access to faster speeds of mainstream cable or DSL providers, satellite internet starts to make more sense. And you'll have access to bundle packages with DirecTV.

If you're looking for a better internet plan, or you're thinking of switching to satellite internet, we can help set you up with a plan that's right for you! Just click on this link ZIP CODE SEARCH and search available deals in your area today.