Home Blog The Sky is the Limit: How ISPs Keep You Connected during Flights 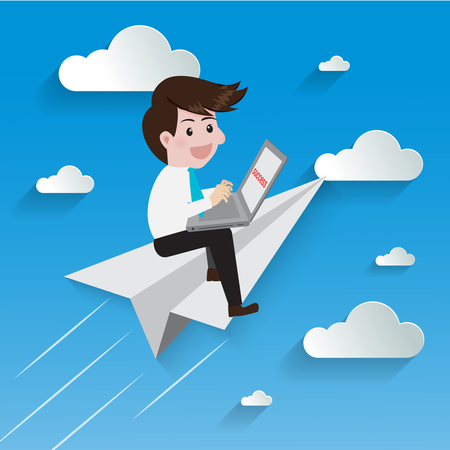 The Sky is the Limit: How ISPs Keep You Connected during Flights

Have you ever wondered how airplane are able to keep you connected to the internet. We explore how airline passengers can stay connected even when they are soaring through the skies.

We outdid ourselves when we conquered the skies, and now, with in-flight internet connectivity, we’ve once again proven that the sky is indeed the limit!

As more and more millennials board flights around the US, 88% of the population rate their flight experience based on in-flight connectivity quality and speed. It has become a staple for airlines to offer premium in-flight internet connectivity even miles above the ground as evidenced by a recent article in aviation week.

Internet up in the sky is not much different from internet on the ground; airlines use the same satellites and towers your wireless broadband connection does to provide you with seamless world wide web access.

However, the reason your Wi-Fi connection is faster and stronger on the ground is that the towers that catch the signals from satellites are grounded on the surface of the Earth. They’re much closer to you when you’re at home, rather than when you’re soaring miles above them.

But as the demand for faster in-flight internet connectivity grows, airlines and ISPs are partnering up to provide the best IFC to passengers at the lowest rates possible.

What Makes it Possible?

As airlines and ISPs work in collaboration to provide the best IFC to their customers, they’re making use of advanced technology to do so. As we know, the two most common sources of internet connectivity on ground or otherwise are:

This involves data signals being transmitted from on-ground towers. These signals are caught by airplane antennas and vice versa. This is similar to how your wireless broadband connection works at home.

However, since the antennas and these towers are not in proximity, the connection is slow and doesn’t offer the ability to stream video, for instance. Not to forget that the connection breaks once you reach a certain altitude, which is a given since you’re on a plane!

Although the gear used in providing quality internet connectivity is the same as that on-ground, airlines have to use sophisticated equipment to grip on to network signals because they’re soaring through the skies on an average speed of 550 miles/hour! Therefore, they need ISPs that have several towers and a strong satellite base so the connection isn’t lost in travel.